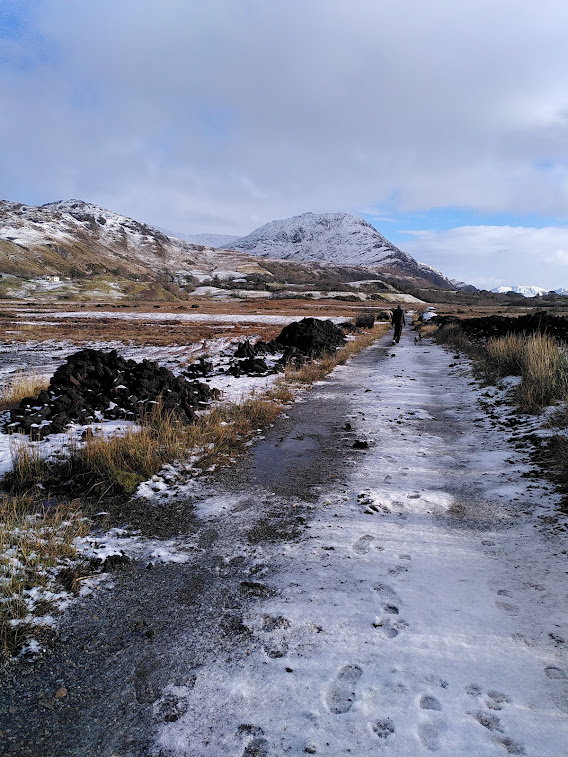 Are you spending a winter holiday in Connemara?

There is nothing nicer than to spend time with family and friends sitting around a turf fire. My favorite things to do is to go for a walk on a remote beach all woolied up and plunge into the icy Atlantic waters before coming back for a game of Scrabble by the fire and hot whiskeys.   Many people will be coming to Connemara to escape the city and here is a list of suggestions for days out and to enjoy our beautiful scenery along the Wild Atlantic Way.

Download the Atlantic Way Explorer  app for free (google and Apple playstore)  to bring you to these locations.

One of ,my favourite places this time of year is Omey. Omey is an island about 30minutes from Clifden,  accessible only when the clear waters of the Atlantic part at low tide.  There are markers in the sand to show the safe driving route to the island or you could park on the land side car park and walk over. Best to go out on a falling tide to maximise your time out there. The options for walking are to park at the graveyard and walk along the beach cutting across the island commonage to meet up with the only road on the island. The Island has many middens (prehistoric landfills!) along the edge and a medieval sunken church.

Alternatively, you may drive onto the island and park at the end of the road (don’t block access), and walk around the crescent-shaped beach over to the holy well found c150m from the beach. An excellent place for a spot of wintering birdwatching as it is one of few coastlines in Connemara which supports wintering birds in relatively decent numbers.  To note are golden plover, ringed plover,  sanderling, and small numbers of brent goose, grey plover, dunlin, and turnstone. Be careful not to get stuck there – see tides on  https://www.sailing.ie/Tides/Galway. An excellent local guide is John O Halloran – https://www.facebook.com/John-O-Halloran-Tours-1755193521378654/

Renvyle Beach is a beautiful white strand beach safe for swimming throughout the year. The scenery is just fantastic with a host of Islands and mountains surrounding it. An excellent beach for walking or to simply admire the stunning views.   It has fabulous views of Mweelrea mountain (at 830m the highest mountain in Connaught), Croagh Patrick, Cramp island, Clare Island, Inishturk, and in the distance Achill island.

Midway down the beach, there is a rocky outcrop with a shellfish midden of periwinkle shells dated to 6000 years old. It is hard to imagine that here is where people lived, in the Mesolithic times, hunting and gathering living on fish, periwinkles, seaweed, and maybe the odd deer if they were lucky enough to catch it. It was a different environment then,  woodland with the sea further out by maybe 50m or more from current shoreline.  On a low tide, it’s a great place to gather dillisk or carrageen for a savoury seaside snack.

Kylemore is magical throughout the year. Kylemore Castle has romance at its core. It was built in 1868 by Mitchell Henry as a wedding gift for his wife Margaret. He also built a beautiful gothic church, a cathedral in miniature, as well as lavish walled gardens. The castle also is of political significance, as Mitchell Henry was a minister of parliament in  Westminister London representing Galway from 1871 to 1885.  The land and castle were purchased by Benedictine Nuns in 1920 after they were forced to flee Ypres in Belgium during World War I. The abbey was run as a boarding school by the nuns until 2010 and had local girls and Indian princesses studying side by side. The castle recently has opened new display rooms with original articles and photos from the Victorian era. Check out the dining rooms reception areas and get a bus to the Victorian gardens. To finish your visit I would recommend tea and cake in the tearooms.

Roundstone village is the perfect place to get a bowl of Chowder and sit beside a turf fire after a bracing walk at Dogs Bay beach or a drive along the Roundstone Bog. The village was built in the 1820s by Scottish engineer Alexander Nimmo, who settled in Connemara he was also the engineer who designed the road from Galway to Clifden and in the 1830s he redesigned over 30 harbours on the western Irish coast. The rugged, backdrop to Roundstone is the sculpted mountain of Errisbegand the village itself sits at a height above a small pier with fishing boats with views out towards the Twelve Bens mountains.

The Derrygimlagh site is another suggestion for a good walk over the Christmas period. This site is otherwise known as the Marconi station where Italian engineer Guglielmo Marconi transmitted the first transatlantic radio signal in 1907. The transmission station in its day was an amazing sight to behold, with the huge condenser house building, the powerhouse with 6 boilers, and a massive aerial system consisting of 8 wooden masts. The station was set on about 300 acres of bogland. This site has been an area of intense human activity for over 100 years. The bogs have been intensively cut in the past to supply the vast transmission station.

It was because of the presence of the radio transmission here that this place was selected as the touchdown site for the first transatlantic flight. In 1919 two British airmen, Captain John Alcock (pilot), and Lieutenant Arthur Whitten Brown (navigator) arrived here from Newfoundland.  They covered nearly 2000miles in 16 hours 28 minutes. They brought with them 300 private letters, the first transatlantic airmail in history. The radio informed the world of their success and enabled them to claim the £10,000 prize.

The site has good interpretation and an excellent 5km looped walk with boardwalks over the bogs. The bogs here are mainly cut by sausage machines that mince the bog and spew out the turf in long wet lines of “Sausages”. It is interesting as it is still an actively used landscape with neat turf piles by the trackside. It is an excellent place to see Connemara black-faced sheep grazing. For this reason, no dogs are allowed on site.

Diamond hill is the most accessible point of the Connemara National park which is around 2000 ha in size. It is a vast expanse of blanket bog and heaths and a small woodland area. Ravens, an enormous crow with a deep guttural cry and a diamond-shaped tail, are commonly seen in this valley. Thanks to the National Park reintroduction programme, the native red deer have been in the area since 1984. Small numbers are often seen in the park early in the morning.

The Diamond Hill climb is particularly rewarding as there is a stunning view from the top of a panorama of Islands (Inishbofin, Inishturk, Clare Island and Achill). There are three walks in the park, the longest is the circular route to the top of the Diamond which takes around 150 minutes. A sunrise or sunset walk in the park is a wonderful experience here not to be missed. Sunrise is often a good time to spot the elusive red deer in the park.

So do download the App Atlantic Way Explorer for free from Apple and Google stores to help and enjoy your stay. I hope that if you come to Connemara you will have a wonderful time engaging with nature and enjoying the sights, sounds, and tastes of the region.

If you are looking for activities to do check out https://irelandwildescapes.ie/

Where can I find a map of the Wild Atlantic Way?

Discover the Best Beaches in Ireland