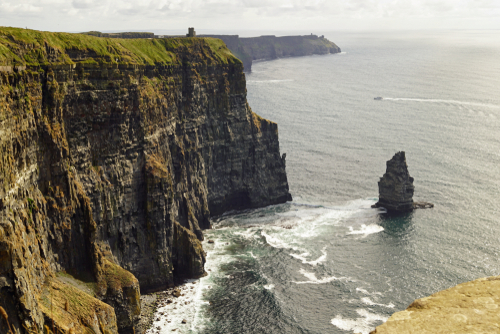 Clare is like nowhere else in Ireland with its thousands of acres of bare limestone pavement. It is a dramatically hard landscape in contrast to its neighbouring county, Galway, which is full of bogs, rivers and lakes. The west coast of Clare has a few rivers each disappearing below ground to form caves and underground channels.   Clare is also noteworthy for its dramatic cliffs in particular The Cliffs of Moher with its sheer faces dropping into the Atlantic. Clare is an unusual landscape of swirling rocky mountains and is also rich in fossils, megalithic tombs and stone circles. May is the best time to visit Clare as the Burren wilderness is home to a mix of flowers found nowhere else in Europe. Alpine flowers are found here at sea level and the summer brings a flush of colour to this stone-dominated landscape with wild pink orchids and blue gentians growing side by side.

To whet your appetite for this amazing landscape I have picked out my top seven sites. Just download the free The Atlantic Way Explorer App from google and apple play stores and you will have all these sites at your fingertips..

Botanically, the Burren is one of the most fascinating regions in Europe with plants normally found in separate parts of the continent growing together. Here plants from sub-arctic and mountainous areas can be found alongside Mediterranean and seashore species. Twenty-three of Ireland’s twenty-seven wild orchids can be found in the Burren. These include the early purple orchid, dense-flowered orchid, fly orchid, bee orchid, butterfly orchid and four species of Helleborine. From May to September the whole area is a riot of colours. The Burren National Park has no visitor centre due to a decision in the 1990s to preserve the area in as natural a state as possible. There are a series of beautiful walks in limestone grasslands interspersed with hazel woodlands.

The Burren is also one of the finest examples of a karst landscape in the world. It has exposed folded limestone rock covering an area of 300km2. The limestone formed as sediments in a tropical sea that covered most of Ireland approximately 350 million years ago. These sediments contain fossils and it is a great place to spot fossilised corals, sea urchins, sea lilies and ammonites. In the National Park, tectonic shifts have resulted in substantial folding of the rock which may be seen at Mullaghmór and gives the hill its characteristic shape.

The Atlantic Way Explorer app will lead you to the parking area. Note parking is limited on-site so take care to park safely and do not block gates. map boards are close to the parking area. A free bus usually runs from the heritage centre in Corofin Phone 065 682 7693. Open all year round.

The spectacular Cliffs of Moher in County Clare are one of Ireland’s top visitor attractions. The sea cliffs were given UNESCO Global Geopark status in 2011. They stretch for 8km and reach 215m at their highest point just north of O’Brien’s Tower. Here you can enjoy unrivalled views of the Atlantic Ocean and see breeding seabirds in summer. They were made famous in the movies Harry Potter and the half-blood Prince and the Princess Bride. The pin on the Atlantic Way Explorer app is for the official car park at this visitor centre. The entrance fee is 7 euro per adult. The Cliffs are also accessible for free from Doolin and Liscannor (see App for details) .

This location is one of two Irish dive sites voted as among Europe’s top 10 and deservedly so. The name is from the glistening quartz crystals underwater. The bay is sheltered from the Atlantic and there is an interesting underwater landscape with kelp, rocks and gullies, easily seen due to excellent visibility. It is a great place for snorkelling, swimming, or rock pooling. There is also a coastal walk here to the southwest overlooking the Atlantic ocean. Kilkee is a charming village with echoes of its Victorian seaside past along the promenade.

If you want to see Celtic art this is the place to visit. This is a  restored 15th-century castle and was once the stronghold of the O’Dea clan. The castle is a tower house and the area is of interest for many archaeological artefacts. The castle houses the Clare Archaeology Centre and is easily accessible. Dysert O’Dea Church is a short walk from the castle and stands on the site of an early Christian monastery, dates mainly from the 12th century. Its most famous feature is the detailed Romanesque carved Doorway. Close to the church’s northwestern corner stands the remains of a Round Tower.

The High Cross, situated east of the church, dates from the 12th century and is one of the finest examples of its kind in Ireland. The carved detail is truly stunning and if you don’t see any other churches or crosses in Ireland this one alone would be enough. Even if the castle is closed this site is worth visiting and the ruins are easily accessible. An Archaeology/History Trail features 25 sites all within a few kilometres radius of the castle. A guide is available at the souvenir shop. Guided trail tours by prior arrangement.

Fanore Beach is a  golden splash of colour against the grey Burren hills. The contrast of its blue sea and sky with bright orange sands, and black limestone bedrock exposed, on the beach is striking. It is a wild beach with crashing waves, backed by a high sand dune system protecting the land. The Burren, being a limestone region, the rocks erode easily and rivers all disappear underground leaving a dry exposed rock landscape. The Caher River flows out onto the beach at Fanore; it is the only surface river in the  Burren. All the rocks within the river are coloured white as they are coated with limestone deposited out of the water.

It is a good place to see fossils, and easy to pick out crinoids, brachiopods and corals in the black limestone. These rocks were formed in a shallow tropical sea over 330 million years ago. Fanore beach is also significant archaeologically. A shellfish midden (cooking area) was found there in 2009. This is evidence of hunter-gatherers people living in the Burren more than 6,000 years ago. It is one of the oldest habitations ever unearthed in Ireland.  Fanore is also a great place for diving and was recently (2019) voted as one of Europe’s top 10 dive sites. This is because it has a natural reef with a semi-circular cavern that contains a myriad of little pockets in the rock, which are home to an abundance of fish and seaweeds.

This limestone cave is  in the Burren Co. Clare  and is home to The Great Stalactite which at  7.3 metres (23feet) is the longest free-hanging stalactite in Europe. Truely breathtaking and worth a visit. Open all year round Adults: €17.50 and Children: €8.50

Inisheer (Inish Oirr)  is the smallest of the Aran Islands and is located close to the coast of Clare. This is a charming island just 3km in length and Irish speaking. It is mainly exposed limestone and has a riot of flowers and thousands of orchids in summer. It has many small fields with stone walls and it is an easy cycle around the flat island through old cart tracks. Inisheer has an old boat ‘The Plassey’, wrecked here in the 1950s, which can be seen at the start of the iconic TV series Father Ted. It has an ancient sunken church in the graveyard with beautiful carvings and the remains of a 14th-century castle worth visiting. The island has bikes for hire. It is accessible via ferry from  Rossaveal in Galway or Doolin in Clare. Ferries in summer are 10, 11, 11.30, 13.00, and 14.45 returning at 13.45,16.45 and 18.15. Please check the times before travelling. The cost for an adult is 28 euros.

I hope these ideas will enhance your trip to Clare. Just download Atlantic Way Explorer from Google and Apple playstores to find your way there.

Discover the Best Beaches in Ireland