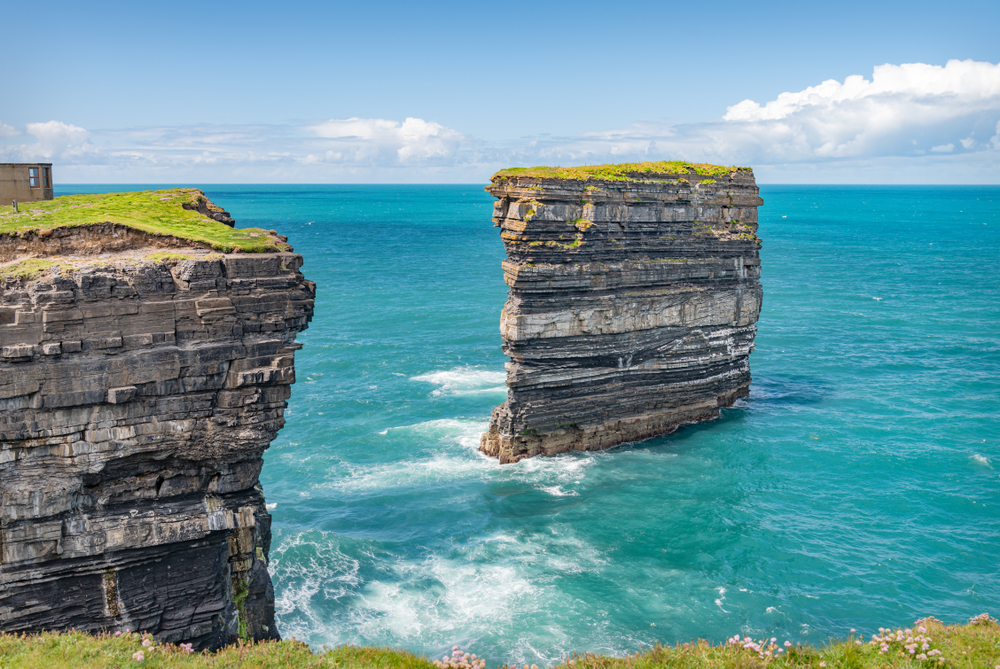 Sea stacks are amazing vertical rock formations formed entirely by the actions of wind and water. The formation process usually begins when the sea eats away into a headland often forming a cave which eventually forms a blowhole and this can lead to the creation of a sea arch and ultimately a sea stack. There are some amazingly dramatic such landforms on the Wild Atlantic Way. These are great to see on a wild day when the waves are crashing all around or on a calm summer daywhen seabirds use them as safe predator-free nesting spots. Here is a selection of my favorite ones all easy to find just download Atlantic Way Explorer app

Downpatrick Head juts out into the ocean and rising almost 40m above the waves, provides unrivaled views of the Atlantic Ocean, including the collection of islands known as the Staggs of Broadhaven.One of the most striking vistas from the head, located just 50 m offshore, is the nearby high flat-topped sea stack Dún Briste. This is a relatively new sea stack as it was only separated from mainland Ireland by a severe storm in 1393. The stack, at 45m high, is a safe haven for an array of breeding bird species including common and greater black-backed gulls, kittiwakes, cormorants and the enigmatic puffins. Another interesting feature of the area is Poll Na Seantainne, a spectacular blowhole that water gushes up at great force.

The Maghera Caves are located beneath Slievetooey Mountain and some are accessible at low tides from Maghera Strand. The setting for the caves is beautiful. Access to the beach is via a car park and there is a short 200 metre walk to the caves. The walk is across sand dunes unto the vast beach with views of the mouth of Loughros Beg opening to the Atlantic Ocean.
There are over 20 caves, 8 arches and 5 tunnels that can be visited, ideally by kayak or small boat. There are three caves along the upper beach which are easy to explore on foot at low tide. Remember to be safe and check the tides.

At Crohy Head south of Maghery Village is found a remarkable Arch Stack known as Bristí which translates to trousers in this Irish speaking area. This 25-metre high sea stack is located around 70 or so metres from shore. The pin brings you to a small pull in place at the side of the road – only big enough for maybe 3 cars. There is a route down the field for a close up view, suitable for the brave. Just hop over the fence indicated by an information sign.

The beach at Malin is tropical-looking with its sea arch to the north shore, clean blue waters and orange-tinged sands. The beach has a single sea stack at the southwestern edge of the beach. It is accessible by 180 steps and it is a steep ascent. Ravens and Choughs are common with the latter often feeding beside the access stairway.

The rocks are a contrasting blue colour and the exotic feel may be enhanced by finding part of a coconut shell washed up on the shore. Coconuts and sea beans are found occasionally washed all along the Wild Atlantic Way having survived a perilous journey from the Caribbean.

Tullan beach, near Burdoran, is wonderfully picturesque wild beach with a light dusting of orange sand towards the north end of the beach. A dynamic beach good for surfing beach with continuous crashing waves. Tullan also has interesting geology due to the peculiar rock formations in the area. Here can be found a series of natural “blow” or “puffing” holes which causes the seawater on a strong high tide to crash through and blow water upwards. Back in the 1700s, locals thought these to be haunted by the fairies with the result of the name “The Fairy Bridges” (to the left of the car park along the track).

The Bridges of Ross, Co Clare

The Bridges of Ross are found on the western side of the natural harbour of Ross Bay near the village of Kilbaha, Co Clare. Historically the Bridges of Ross referred to a trio of spectacular natural sea arches, two of which have since fallen into the sea. While only one ‘bridge’ remains the name remains. It is a short walk from the car park to see this natural wonder.

Bromore Cliffs are situated to the north of Ballybunion village. The cliffs are 60m high and have been sculpted by nature to form headlands, bays, deep caves as well as arches and sea stacks. The cliff ledges are home to Choughs, Falcons, Ravens, Fulmars, Guillemots, Cormorants and Rock Doves and the sea below is inhabited by Seals, and Dolphins. In summer the cliff edge is awash with, sea pinks, yellow kidney vetches and blue sheepsbit. The cliff walk is accessible easily from Ballybunion fenced and is an easy walk.

For these and other Geological and natural history, wonders download Atlantic Way Explorer app for FREE from Google and Apple playstores