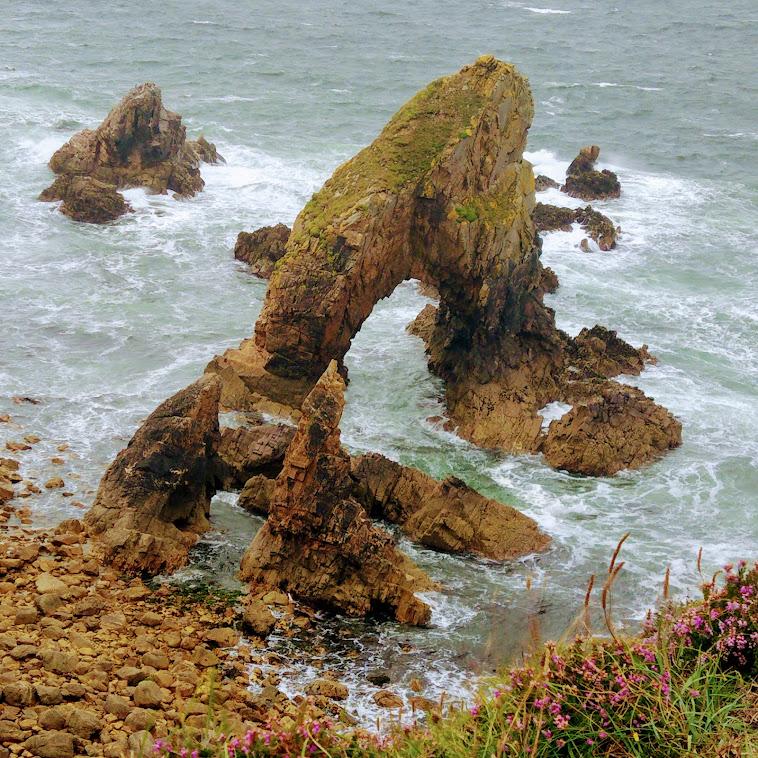 The wild Atlantic way has many spectatular walks along its route.  This time of the year the seas are becoming rough, surfers are taking to the water and waves are crashing along our wild western shores. There is nothing I love better than to experience the energy of the ocean, sea the foamy waves and of the rocks and shores chisled by wave action.

We have some of the highest most dramatic sea cliffs in Europe as well as a host of blow holes, sea stacks, sea arches and sea caves. I have selected 8 sites below fro,m my app Atlantic Way Explorer but I could easily have doubled the list !

This site is just amazing At 596 metres it has some of the highest and finest marine cliffs on the island of Ireland and although less famous than the Cliffs of Moher in County Clare, these cliffs reach almost three times their height. This tall mountain has been eroded by the sea till the southern face forms a precipice from the long knife-edge which forms the summit. This is called “One Man’s Path”, and is one of the most remarkable walks to be found in Ireland.

In addition you can impress your friends by telling them you are walking the American Appalachian Trail. Slieve league is , since 2010, an officially recognised part of this 2,200 mile long route. This is because  geologically the Appalachian Mountains and Slieve League were originally part of the ancient Central Pangean Mountains range millions of yeas ago.

There is a good car park on-site and the Atlantic Way Explorer app will take you there.

You can park there or proceed through the gate and drive up to the parking point on the cliff edge.

The Maghera Caves are located beneath Slievetooey Mountain in Donegal and some are accessible at low tides from Maghera Strand. The setting for the caves is beautiful. Access to the beach is via a car park and there is a short 200 metre walk to the caves. The walk is across sand dunes unto the vast beach with views of the mouth of Loughros Beg opening to the Atlantic Ocean.

There are over 20 caves, 8 arches and 5 tunnels that can be visited, ideally by kayak or small boat. Several are accessible on foot. There are three caves along the upper beach which are easy to explore on foot at low tide. Remember to be safe and check the tides.

Although not much of a walk it is an amazing view. At  Crohy Head south of Maghery Village in Donegal is found a remarkable sea Arch Stack known as Bristí  which translates to “trousers” in this Irish speaking area. This 25-metre high sea stack is located around 70 or so metres from shore. The pin brings you to a small “pull in” place at the side of the road – only big enough for maybe 3 cars. There is a route down the field for a close up view, suitable for the brave. Just hop over the fence indicated by an information sign. Just follow the pin on Atlantic Way Explorer app to find it.

The sea arch at Downpatrick head Co Mayo is probably the most famous such stack in Ireland It is called Dún Briste and stands at 45m high. It is  located just 50 m offshore and is  a relatively new sea stack as it was only separated from mainland Ireland by a severe storm in 1393. Another dramatic  feature of the area is Poll Na Seantainne, a spectacular blowhole that water gushes up and blows out at great force on a high tide with a stormy sea.

Downpatrick Head peninsula juts out into the ocean and rising almost 40m above the waves, it provides unrivalled views of the Atlantic Ocean, including the collection of islands offshore known as the Staggs of Broadhaven.

Downpatrick Head is also home to the ruins of a church, holy well and stone cross. Together these mark the site of an earlier church founded by St Patrick. Ireland’s patron saint. St Patrick is also honoured with a statue on site that was built in the early 1980s. This is a traditional pilgrimage destination, and today the crowds still gather for mass on the last Sunday of July.

Free admission and parking. Open all hours. Just follow pin on Atlantic Way Explorer app to find it. The app is free to download from the google and apple playstores.

Croagh Patrick mountain, also known as ‘The Reek’, stands like a pyramid on the Mayo skyline.  It is both a modern and ancient pilgrimage site, with many people climbing it, many of them on the last Sunday in July known as  Reek Sunday. It is a very tough climb to the top, even tougher, traditional style, in bare feet or on your knees.

There is a magnificent view of the coast in particular of Clew Bay below.

Within this large sheltered bay, an archipelago of over 100 humpbacked shaped islands sits, looking like a school of whales heading out to sea. These are drumlins that were dropped and molded by the action of glaciers, thousands of years ago.

There is a large car park with a small parking fee on-site.

The spectacular Cliffs of Moher in County Clare, one of Ireland’s top visitor attractions. The sea cliffs were given UNESCO Global Geopark status in 2011. They stretch for 8km and reach 215m at their highest point just north of O’Brien’s Tower. Here you can enjoy unrivaled views of the Atlantic Ocean and see breeding seabirds in summer. These cliffs are iconic and were featured in the movies The Princess Bride and Harry Potter. Just follow pin on Atlantic Way Explorer app to the official car park at this visitor centre. The entrance fee is 7 euro per adult. The Cliffs are also freely accessible from Doolin and Liscannor. Just follow pin on Atlantic Way Explorer app.

Bromore Cliffs are situated to the north of Ballybunion village Co Kerry. The cliffs are 60m high and have been sculpted by nature to form headlands, bays, deep caves as well as arches and sea stacks.The cliff walk is fenced and an easy walk. Just follow pin on Atlantic Way Explorer app to find it.

Mizen Head is Ireland’s most southwesterly point located at the end of the Mizen Peninsula in Cork. The cliffs of Mizen Head rises high above the Atlantic ocean. It is the best place in Ireland to watch whales and dolphins from the land.  Species seen from this location include minke, fin, humpback whales, common dolphins, harbour porpoises as well as seals, and basking sharks.  For a hair-raising experience, walk across the iconic bridge high above the gorge to get a true wild Atlantic experience. Just follow pin on Atlantic Way Explorer app to find it.